Time stands still for no-one. Time doesn’t care if you’re out of action with a bad back, feeling extreme exhaustion, facing a seemingly endless list of tasks. Many hardworking, well-intended mums and dads around the world right now are probably wishing that time would slow down, or for their kids to have an extra few weeks at school (mine will finish their school year about two weeks early!).  We don’t have ill-feelings towards our children. but we do want a little extra time to pull the festive season together, in particular, when elves are involved.

Unfortunately, the sound of time ticking away grows louder by the day.  No-one cares what else mum has to get done; blogging, website maintenance, photography, cooking, Christmas preparations …. Christmas is coming at a rapid pace, and we need to get our act together quick smart.  Likewise, two little elves, along with two pets and perhaps an additional mystery visitor have crashed into my world and sent it spinning out of control.  Frustratingly, they demand more of my already limited supply of time.

Given everything I’m sharing, you’re probably screaming at your computer screen for me to lock the doors and not let those little suckers in! It’s tempting, and the thought has crossed my mind more than once. I could give credible reasons for the elves’ non-appearance this year.  But something stops me from shutting them down; there is a reason behind their madness.  So, today I want to introduce you to our family of elves and elf pets to help you get a better feel for their unique little personalities and how they have grown to be part of our family throughout the years of visiting our home. Without further ado, allow me to introduce you to our clan.

Meet Alfie, who is the original, very first, elf to find her way to our shelf (if only she’d just sit on the damn shelf). Alfie was relatively tame during her first year with us. In hindsight, I suspect she may have been suffering a mild case of shyness. I know I’d feel considerably uneasy being thrown into the midst of an unfamiliar new home with a bunch of strangers.

Throughout her first Christmas with us, Alfie was wonderfully behaved. She never engaged in anything particularly outrageous or messy; we’d wake up each morning to find her in a different spot, enjoying a bowl of Cheerios, down on the floor doing some colouring in or playing with some toys.  Having Alfie in our home was just like having another sibling in the house and she was always a pleasure. My first-born daughter was instantly fascinated by Alfie and loved her dearly, and the bond between Alfie and child has grown stronger every year.

Alfie’s true colours shone through brightly the following year when she brought a friend along to play.  Why not?  By now we had two children, so an elf to visit each child seemed a perfect idea—there would be no arguing over this little red person who has suddenly shown up out of nowhere—nice one Alfie, very thoughtful of you. There’s no harm in having two little elves join us over Christmas. Or so we thought!

Next came Sparkle, a friend and comfort to Alfie.  Sparkle is a very good friend to Alfie at the North Pole (and like Alfie, has not once bothered to sit on a shelf).  Their long-standing friendship is evident.  You can compare them to peas and carrots; they just work.

However, Sparkle’s arrival seemed to trigger a change in Alfie’s demeanour.  She came out of her shell, taking great comfort in the presence of an old friend.  Sparkle gave Alfie the support she needed to shine. While this was nice to witness, it was our new friend Sparkle’s presence that paved the way for anarchy to occur!

Soon it became clear that when together, these two elves possessed an unrivalled sense of quirkiness, flare and humour for which we were not prepared.  I wanted to ask many questions to the great man himself, Santa.  In particular, knowing what this bunch of misfits from the North Pole are capable of, why would he send such a crazy combination of elves to our home?  Out of everyone wanting to welcome elves into their homes, he chose my home as the place for this bunch of elf outcasts.  Why, Santa?  With the arrival of the elves, chaos descended on us.

Not far behind Sparkle’s arrival, Hart the reindeer tagged along to take part in the Christmas fun delivered by Alfie and Sparkle. Don’t let the name fool you, though. Hart has been known to get herself in as big of a mess as the two elves. Who would’ve thought a reindeer would have the smarts and ability to get herself into so many predicaments; I’m sure the elves have used their own tactics to coerce her, but nevertheless, it’s a behaviour I wouldn’t have expected from one of Santa’s well-trained reindeers. (I figure Hart must be one of the reindeers considered not disciplined enough to join Santa on his Christmas night flight around the world each year.)  Still, my girls love her dearly.  They love that they can hold and cuddle Hart whenever they like, and this is a beautiful sight to see.

Finally, Christmas two years ago, a St. Bernard dog named Glitter unexpectedly appeared at our breakfast table.  By now, you’d think we’d be used to the influx of surprise visitors, but this time I felt a sense of uneasiness.  What could I do? We could hardly leave the beautiful dog outside; I’m sure Santa wouldn’t have appreciated that.  So, St Bernard also joined our Christmas clan and slotted in seamlessly. Soon enough, we discovered that Glitter was not house-trained. Remember that picture of the Elves and pets trying to sell their pee as lemonade? Well, word on the elf street is that this was a last-minute idea in response to Glitter peeing on my clean floorboards!  He let it flow; marking out his territory like any other non-toilet trained dog.

Yep, you have read correctly. This year, another new visitor is joining the clan.  I’ve come to expect it now. Soon I’m confident we’ll have the whole of Santa’s workshop disembarking at our front door.  So, who is this new mystery guest?  All will be revealed soon, but if you look back on last week’s photos of the elves during their time in quarantine, you may see a clue. You’ll find this clue somewhere in the glasshouse with Alfie and Sparkle. I wonder if you can find it.  We also had another character, trailing the elves this year.  He’s very hard to spot though!

There’s more to this elf mess than first appears.  I complain about the work they bring, the mess they leave behind and the precious time lost to these little rascals. However, truth be told, it was this little group of friends who first unveiled and revealed a creative side of myself I never knew existed.  It had been trapped inside for a long time by a horrible, lifeless ED who wanted me to have nothing to do with anything that was remotely fun.  Likewise, ED wanted to keep this healthy part of myself a secret from my own sense of awareness. ‘Don’t let her know what she’s capable of and she’ll remain under my control forever’.  This is all ED wants to over its victim: a belief you can never be good at anything.

I took a lot of convincing to acknowledge that what came out each night from these elves was something extraordinary, that gave everyone pleasure.  Yes, our elf family deserves credit for where I am today; honing into my creativity as I write blogs and take photographs that continue to improve every day.  In the clutches of a dominating ED hard at work, this wouldn’t have been possible.  Therefore, I am very grateful to those dear elves and pets. They gave me a reason to keep going, a reason to smile and the life-changing discovery that I have talents that people acknowledge and appreciate.

There are two other significant people in this story.  My two beautiful girls who have grown to love their elves and the stupid things they come up with each year. This year, both girls have knitted and sewn together sleeping bags, in anticipation of their elves’ arrival.  The love they have for the elves and their pets is heart-warming to witness.  For as long as they want their elves to return in all their raw waywardness, you bet, those elves will return. The smiles and laughter make the hard work worth every minute.  As for the tears that fall when it’s time to say goodbye, obviously, this isn’t the highlight, and sometimes I find myself tearing up and questioning whether I’ve done the right thing.  But it serves to show what a mind-boggling and positive job I’ve done during my years of elfing around.

My wish for my girls is to enjoy the elves for as long as possible and to continue to believe in the magic.  One day, hopefully in the distant future, my girls will appreciate my efforts to make Christmas a magical experience that they’ll never forget, and to give them a lifetime of beautiful and crazy memories to reflect on.  Maybe, they will hone in on their own creativity, partly inspired by a mum who brought the elves into their lives and planted the seed for them to continue the tradition, when they one day may have children of their own.

Posted in Photo blogs
Christmas is coming! Creativity Elf Antics Finding my creative side For my children Our elf clan Thinking like an Elf 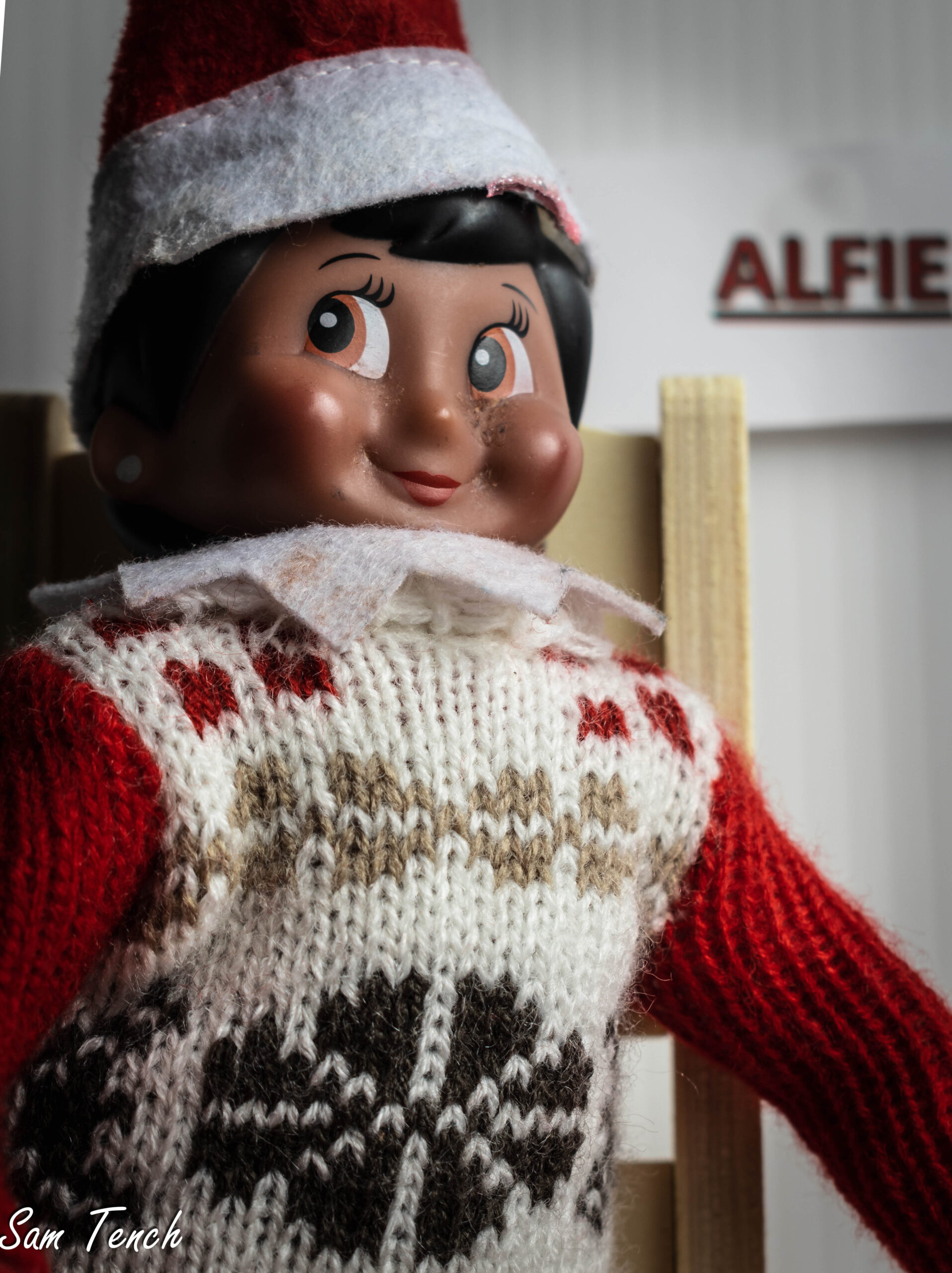 The original of the pack, Alfie. 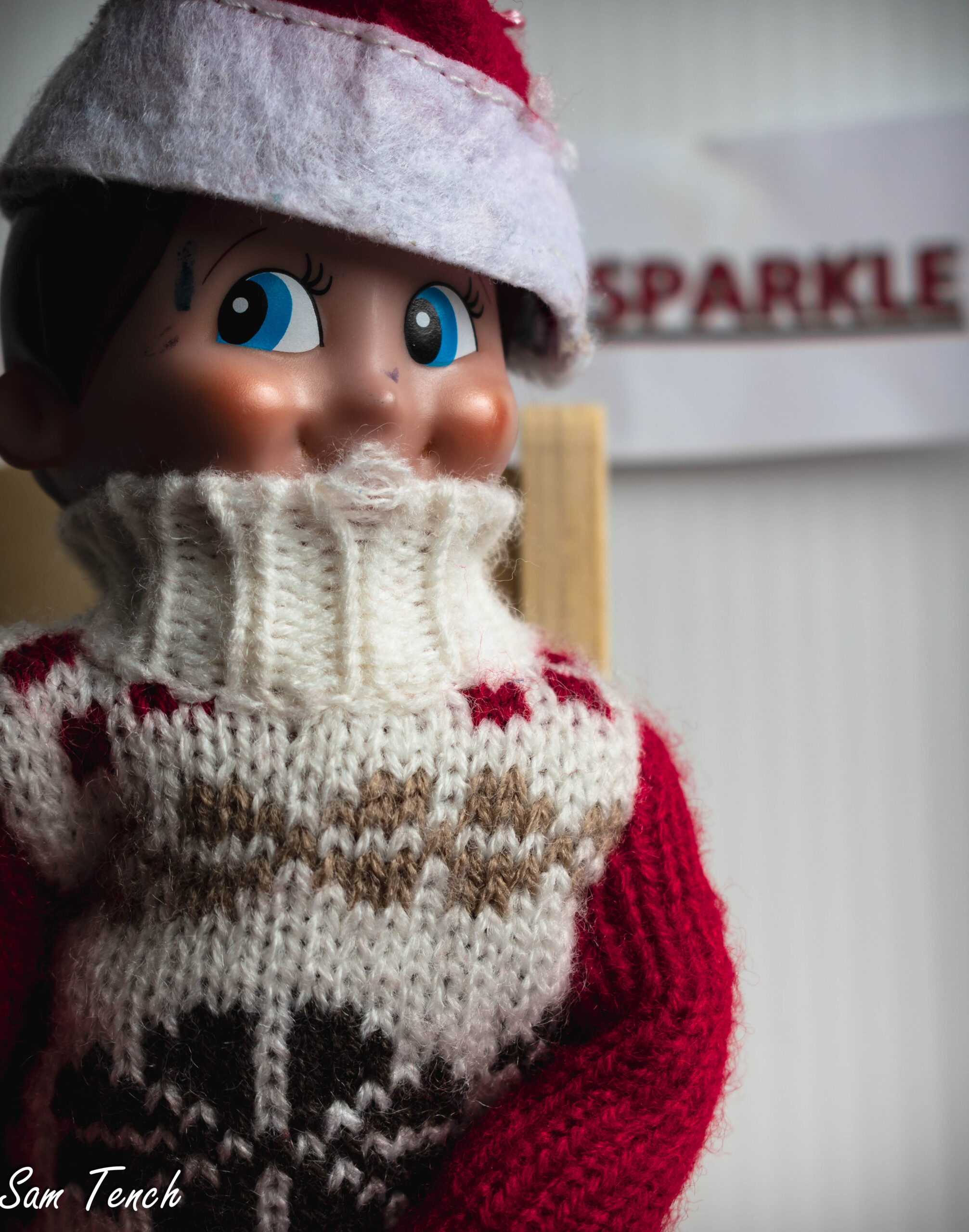 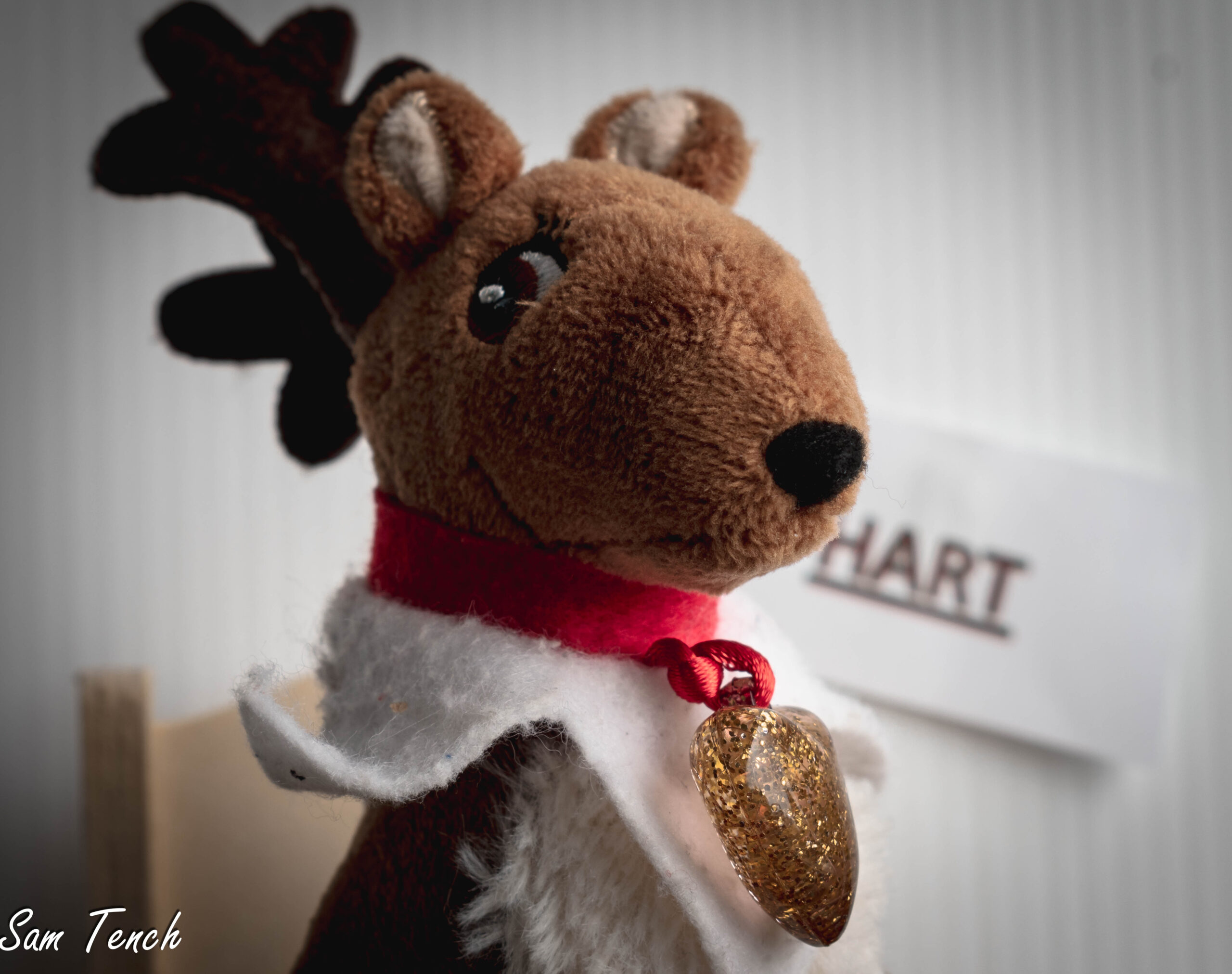 The not so well trained reindeer, Hart 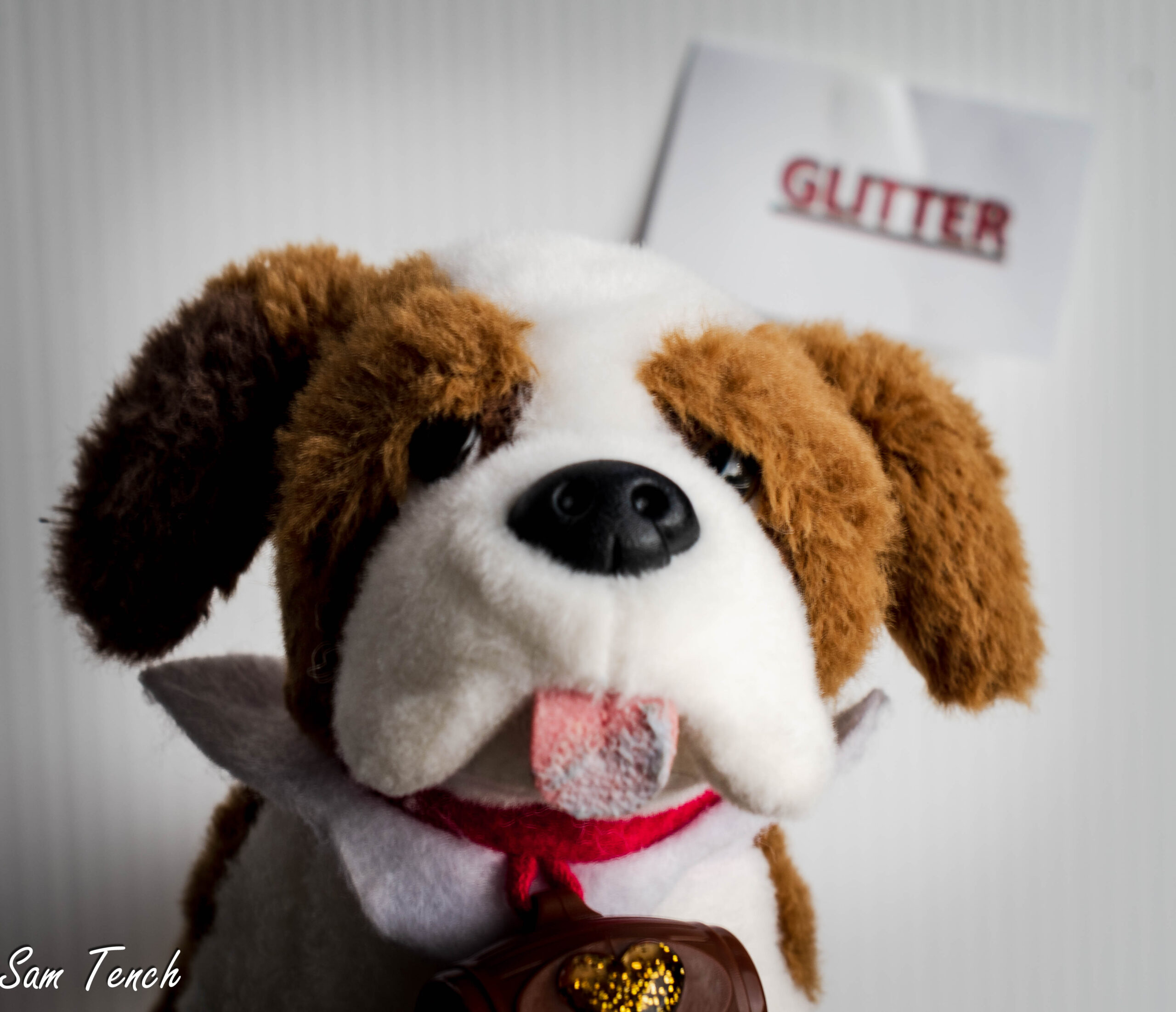 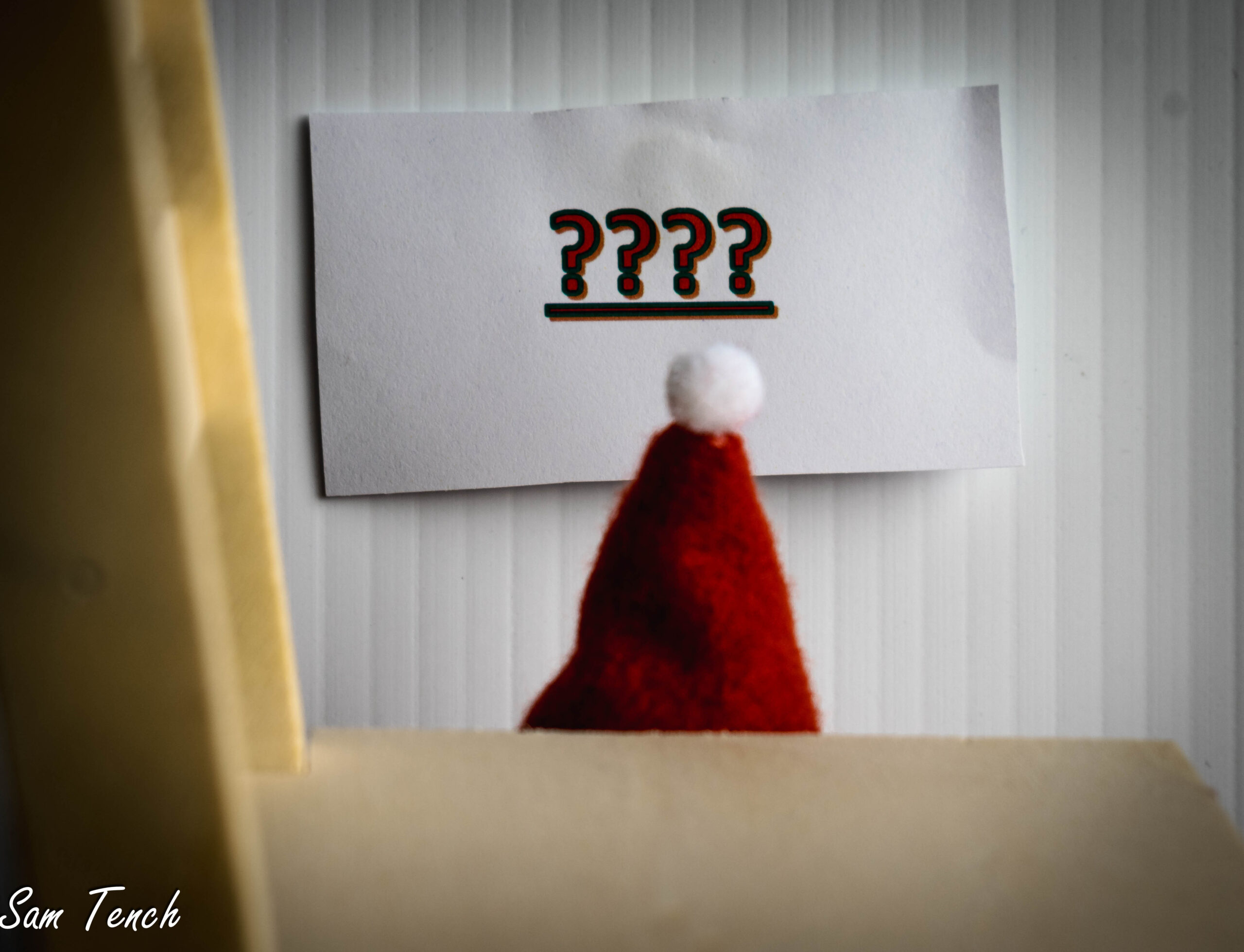 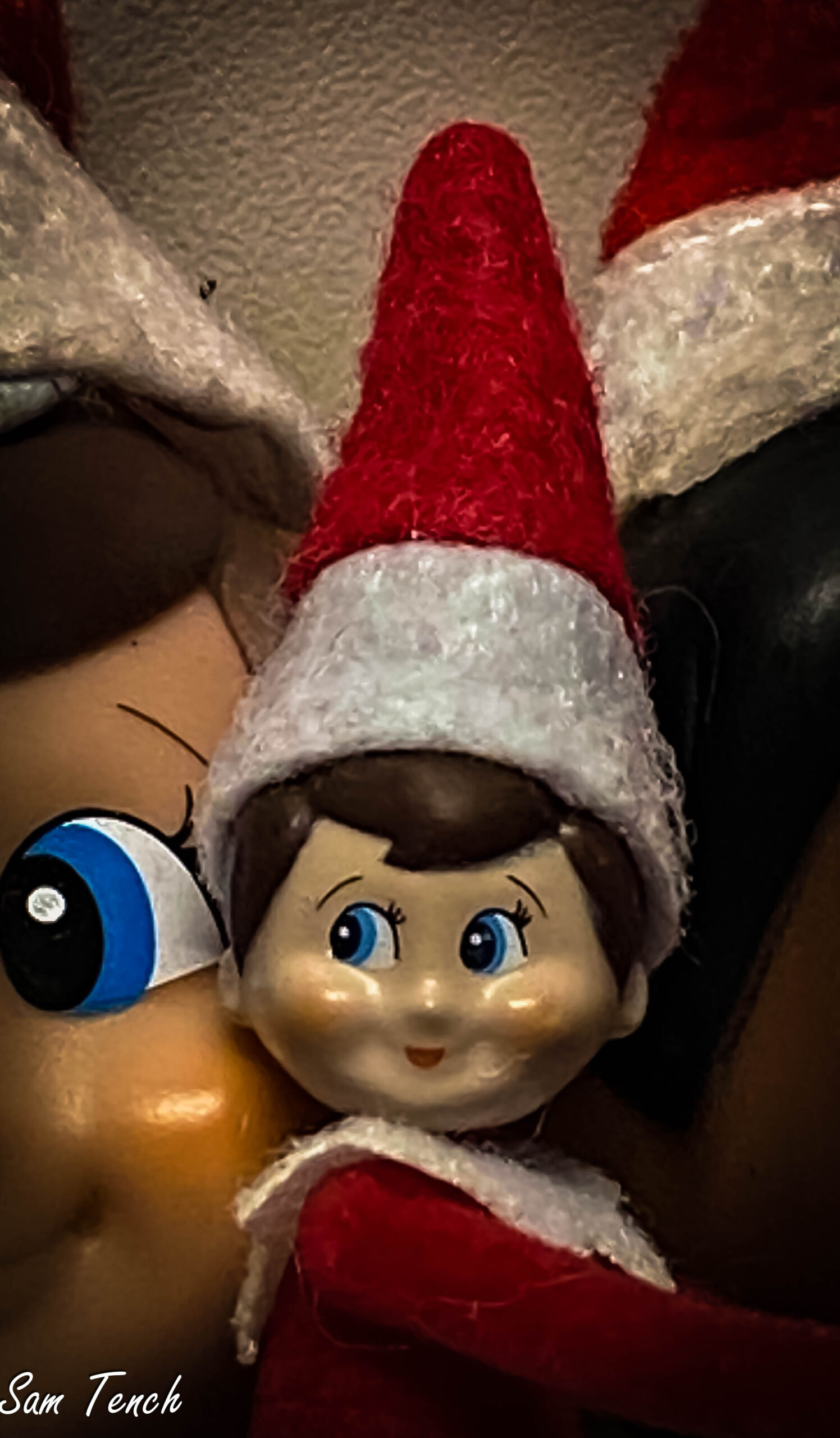 The smallest Elf in the world!