Following a long drive home from the country, this morning I happily woke in the comfort of my own bed. Waking up to the familiarity and coziness of my own bed is one of the pleasures in life that I often take for granted.  Call me strange, but the feeling of being snuggled up in my own bed following time away from home is divine, if only I could stay there all day! Dream on!

This road trip away was also our first with the elves in tow. Thankfully, we had no significant catastrophes to speak of (almost a catastrophe, but I’ll come back to that later). However, with the wisdom of hindsight, I know I should’ve given myself a well-earned break from elfing around. Despite how fun it may appear to play host to some of the craziest elves known to Santa, it’s a long and tiring job.  Yes, there are amusing moments (like when you wrap the whole lounge suite up only to have also wrapped up the remote control).  However, there is a downside to this larking around. There are no days off.  Even the days when life feels like a never-ending list of tasks that must be ticked off, this chief elf always has extra work to get done.

Maybe a smarter idea would’ve been a letter from the elves, encouraging the girls to go and enjoy their trip while they stayed at home, awaiting their return. That would have been the option most wise people would take. Unfortunately, my mind doesn’t work this way. Nope, at times like this that my brain makes it abundantly clear that the show must go on. No slacking off here!

Having planned each day for the elves carefully before leaving home, the time had come to gather all the props together and hide them before the kids finished school for the year.  Now this may sound easy, and if I had Mary Poppins at my disposal to ‘click’ her magic fingers, the kids’ cases would have magically packed themselves, maybe mine would also pack itself for that matter!  And all the food we thankfully packed would have marched its way from the pantry and jumped into the tubs ready to go! What a lovely thought!

On the morning of our departure, the girls were delighted to discover the elves were ready and waiting to travel with us!  Suitcases packed, the elves waited patiently in the backseat of the car to join us on our four and half hour drive to Metung, on the Gippsland Lakes. The girls were excited about having the elves sit beside them in their very own custom made, state of the art car seat!  The girls held onto cameras, pool floaties, walkie talkies, books, snacks and a suitcase each full of toilet paper, tissues and a few changes of clothes.  Whilst this was all very exciting for them, they missed the pleasure of experiencing all the extra planning and packing that this chief elf was busily doing as they enjoyed their last day of school.  Now, my idea of how to spend the kids last day at school would have involved me being sprawled out on my day bed with a cold drink, relaxing and doing everything that brings pleasure before the impending mayhem that six weeks of school holidays brings! Not this year!

Before I go on, the previous day I had had an injection into my injured lower back and was supposed to be resting for at least 24 hours! How’s that for perfect timing?  Thankfully, I had my own version of Mary Poppins, who happily popped over to lend a helping hand!  Nan was on hand to help get the work done. So, as I packed costumes, a tent, caravans, food, blankets and a whole lot of other ‘props’, Nan took care of the girls’ suitcases.  Thank goodness for Nan, aka, our Mary Poppins!  By the time school was out, the kids’ stuff was packed, the elves were ready, food packed and all ready to be loaded into the car.  Did I mention I had only three bags of elf accessories? After this experience, I’ll think twice before taking the elves on a road trip!

On arrival at Metung, the first job for this chief elf was to get a campsite set up somewhere within our accommodation, without being sprung. What a secretive and stressful rush!  Everyone was on high alert to ensure the girls weren’t heading my direction. I’d anticipated that they’d want to do a search of the premises for someplace which had already been set up by their sneaky little elves. But I was wrong! Once we hit Metung, the elves were temporarily forgotten (shock horror for me), left to sit, all alone in the car until I, the chief elf, came to their rescue. By this time, I had a lovely campsite ready and waiting for them to enjoy!  As for the girls, they hadn’t given their elves a second thought. Not until the following morning did the girls remember. They called, ‘Where are the elves?’ and proceeded to find them promptly. ‘Oh my god Mum, come and see the elves, they brought the tent and caravan, and they dropped toilet paper all the way up the stairs.” ‘I sign and say to myself, ‘Try to act surprised Sam, you can do it!’

So, what else did the elves get up to?  They were amusing during our week at Metung. One morning, for example, we woke to a sign suggesting they had baked us some fresh banana bread. Yum, who doesn’t love a good slice of banana bread?  We made our way to the kitchen to find a banana bread like nothing I’ve seen or tasted before!  A loaf of unsliced bread with cut up pieces of banana stuck into its sides (resembling handles!), some butter and a knife (elves faces covered in butter!), lights, and the elves who, of course, had donned the right costume for the occasion — banana suits! ‘Mum, that’s not banana bread!’ Georgie wasn’t fussed though; she proceeded to pick at the bread spreading generous lashings of butter on each piece she tore off thinking it was the best banana bread ever!

Popcorn with a side of Poop!

The popcorn morning, oh boy, what a buttery mess!  There were no surprises here. This might be described as a case of elves imitating life! Having watched the kids consume a generous amount of popcorn the previous day, I wasn’t surprised to find the elves inside the microwave, shoving as much popcorn in their mouths as possible! Co-incidence?  I think not.  The elves appeared to have popped a couple of bags of buttery popcorn, left the rubbish on the floor and couldn’t wait to get it into a bowl before devouring it. Nope, they were all stuffed into the microwave, having a good old munch. What about the Poop? This one is a bit of a mystery.  No-one seems to know where this blob of Poop came from which randomly showed up in odd places (including the microwave) during our trip.

The highlight of our time away with the elves Occurred one morning when the house awoke to an explosion of laughter and the words. ‘oh my god’!  The kids were comparing their faces, arms and legs which had been treated like a blank canvas primed and ready for some graffiti. Then the note telling them to:

Without wasting a moment, they burst into Pop’s bedroom to find him up walking around and questioning who had painted his nails green?  Pop was compelling, and Nan couldn’t stop laughing at the sight of his roughly painted nails that had little watermelons stuck on top.  Next, it was a race to find Dad who was sleeping soundly.  Not for long though, as the girls jumped on top of him to investigate his nails.  This time it was the toes that had been painted green!  This morning’s mayhem was the best one ever, according to my kids.  It’s always the way, do something crazy to one of the adults for maximum return!  Oh, and before I forget; one of these two men with pretty nails may have neglected to remove the polish for a day or two!

What the girls didn’t have the pleasure of witnessing was the night before when their mum was trying desperately not to get caught scribbling on the adults’ faces, freezing as they experienced the sensation of having a texta drawing all over their faces with a shake of the head or a turn of the body.  Nor did they see the nail polish incident! Let’s just say that green nail polish wasn’t only on Dad and Pop’s nails.  It may have accidentally poured onto some floorboards, splashed a wall and left a key piece of evidence on Mum’s PJ’s that will not wash out!

With only eight days to go, the countdown to the elves departure is well and truly on.  Yes, I’m counting down the days until I get a small piece of my life back, having a room in my house cleared of all the storage boxes, not continually waking up to another production in the house and feeling a little less tired.  Of course, I know there is a flip side to this.   During a year that may go down as being one of the hardest in their lives, my two little girls will shed quite a few tears on Christmas Eve when they will say goodbye to their beloved elves for another 12 months.

What a treat! The elves spin on 'freshly made Banana Bread'. 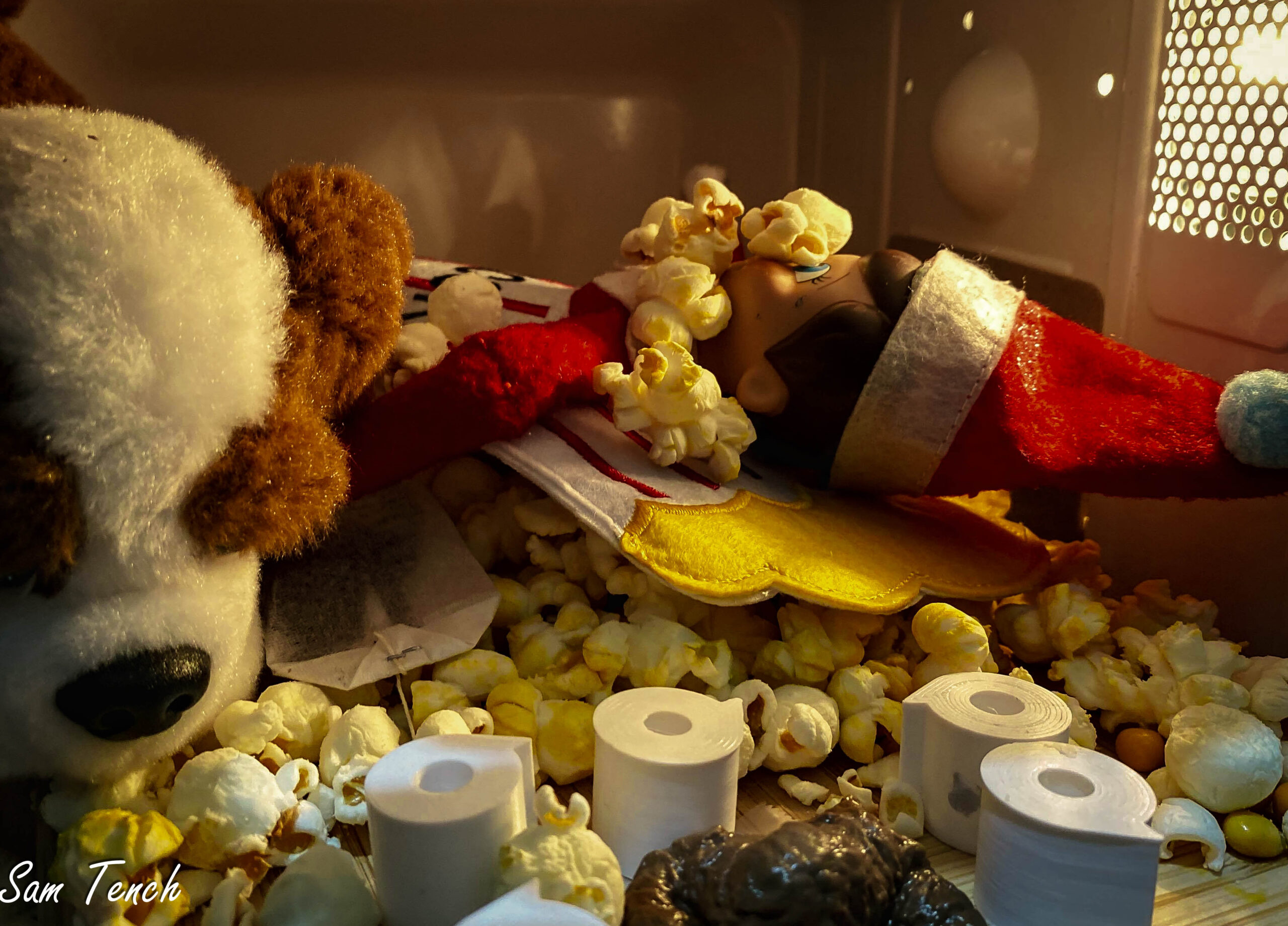 What a sight to wake up to!

Reminding us that it's time to head home!