What will you be doing this Grand Final Day?

At the start of 2020, I had not heard of COVID-19.  Any suggestion that the Australian Football League’s (AFL) Grand Final would not be played in Melbourne in September would have been laughed at. Impossible.

For the footballers and teams involved, together with their supporters, the anticipation of another AFL Grand Final is immense and exciting. Even if your favourite team doesn’t quite make it to the final match of the season, the buzz is in the air; it’s a national tradition to get together to mark the end of another season.

Loved by most Australians and highly symbolic of a nation’s culture, many supporters liken football to the blood running through their veins; the sport is part of what being Australian is about.  Therefore, the mere thought of cancelling the 2020 season when COVID-19 struck in March, was a subject of deep debate. The AFL 2020 season was suddenly unlikely to go ahead due to the growing risks associated with the newly uncovered virus.

I imagine a very fine line ultimately decided the game’s fate for 2020.  The logistics and risks associated with going ahead with a season of a game which is vastly known for its high degree of contact must have been an ordeal for decision-makers. However, the financial risk of not going ahead was too significant for any sporting code to ‘skip a year’ of a competition. Likewise, the mental impact, for a sport-loving country that takes great pride in its unique national code, the AFL, would have been immense. For several weeks, no football was played. Behind the scenes, big decisions were being made to enable the game to go ahead. Yet, despite the AFL’s sheer determination to ensure a path forward became a reality, many people associated with the game were not so lucky.  With no crowds for most of the season and limited funds, the league and its clubs have had to make some jobs redundant.  Positions otherwise deemed essential, suddenly no longer existed. People with mortgages were suddenly put in a challenging situation. This predicament has sadly been the case for many Australians.  However, behind doors of every great football and marketing team is a story of just how hard individual football teams have been hit.

The mere success of the 2020 season going ahead hasn’t been without its problems. People who have filled crucial roles in the game have suddenly been deemed unnecessary. So, while clubs and their fans have been grateful for the season 2020 going ahead, the significant casualties deserve acknowledgment.

The challenging path to victory

The football season, like the year itself, has been like none other previously witnessed.  Football games have been played without the crowds that provide the jubilant atmosphere for which football is known and loved.  Some games have been played to a crowd of lifelike supporters made out of cardboard!  Credit goes to the person responsible for this innovation. Filling stadium seats with the cardboard cut-outs of faces of supporters is brilliant.  Yet, as quirky, resourceful and imaginative as it may be, cutouts of supporters isn’t the same as the spontaneous roar of a crowd. I imagine the footballers must have felt strange, looking to the stands, only to be greeted with blank and lifeless stares. And where’s the noise? Football and the racket of screaming voices go hand-in-hand.

For a large part of the season, seats have been empty. One of our noisiest games has been played in silence.  Then, there are the ‘hubs’ which have been the subject of much debate. Hubs requiring players and their families to relocate to a state, such as Queensland, considered COVID-19 safe, for the better part of a year. What about Victoria?  The long time regarded home of football.  The sad reality is, Melbourne will not feature in the Grand Final this year.  Melbournians will hear no sounds from the Melbourne Cricket Ground (MCG) as the crowds cheer an excellent kick or boo a bad umpiring decision.  This year’s event will be an isolated Grand Final for Victorians, with Premier Dan Andrews declaring group celebrations as being a law-breaking act.

For the teams lucky enough to have overcome the many hurdles this year, preparations and celebrations look different to what we’ve come to know and expect. There will be no parade in Melbourne to acknowledge the two teams left standing; there will be no football breakfasts nor other events that fill with the week leading to an AFL Grand Final. Victoria is missing out.  For the first time in 123 years (1), the Grand Final is being played outside its home ground, and home state. Lucky Brisbane.

Here in Geelong, there is little sense of the presence of football. Kardinia Park sits unused much like a ghost venue due to all essential team and staff living interstate for months during the playing of the season’s games. There’s no sense of excitement for young children hoping for that last chance to get a glance at their favourite players in training; maybe even an autograph if lucky!  In terms of the City of Greater Geelong, there is a distinct sense of something missing.  There is no buzz, no sense of excitement or anticipation for what the grand final weekend might bring for our favourite team the Geelong Cats (or Richmond if you’re a Tiger fan). Previously, we’d be experiencing an influx of Cat’s flags, and other merchandise spread unreservedly over shop fronts and homes. This year presents a much different picture.

With just three days until the big game, Geelong is missing its usual sense of excitement, hope and the thrill of having its team make the final for the first time since 2011. There is little bantering between the team’s supporters and group get-togethers to watch the event are not permitted. We face an unusually quiet Grand Final day in 2020.  Even in my own home, a shrine to all things Geelong Cats, there is a very different sense.  If I didn’t know better, I would not know it was Grand Final week.  Nor would I assume Geelong was one of the lucky teams to be stepping up to contend for this year’s winner’s cup. The Grand Final vibe seems to have been lost with COVID-19 in Victoria.  Also, Geelong will be running onto the ground for the very last time with one of the game’s greatest players and true gentleman, Gary Ablett Jnr. I can only imagine the attention he would be receiving right now if he were here in his hometown of Geelong.  A player deserving of much gratitude for wowing us throughout so many seasons will sadly exit the game in a cloud of silence.  Knowing Gary, I’m sure he’ll be happy to slip out at the end of Saturday nights game, hopefully with a win, yet humbly unnoticed.

A changing perspective of celebrations

Traditionally, a win at the AFL Grand final has paved the way for a big night full of celebrations. Lucky supporters may be able to attend the exclusive after-game parties full of celebrating individuals who may have had a few too many beverages.  Players, key staff and major supporters want to embrace the joy that comes with victory.  Likewise, out on the streets, a win equals mayhem. At previous grand final occasions, it seemed like every resident of Geelong had squished themselves into the city centre; doing so in the sheer enjoyment of winning a premiership. Celebrating as they stood shoulder to shoulder without a second thought; in fact, it was probably acceptable to go ahead and hug whomever you happened to be standing next to.

These celebrations would go well into the early morning of the following day. Street parties with thousands of people dawning the streets in victory, singing their team’s song and expressing gratitude for bringing the Cup back to their team’s home. Such celebrations may go on for days with clubs holding their own events as a way of saying thank you and sharing the victory with their loyal fans.

But this year, celebrations will take on a new meaning.  Regardless of who wins on Saturday, October 24, one thing is for sure; the act of celebrating victory will be different.  In Victoria, with large crowds and group festivities banned (for this year at least) with failure of complying incurring considerable fines, we have to listen and comply.  Instead of heading out, we’ll stay at home.  That is our current reality for a day that traditionally brings everyone together.  This year, instead of being together, we are divided as a nation.

With grand final day almost here, we should all feel a sense of happiness that this event has even been able to go ahead. Unlike previous years the contenders, Richmond and Geelong, will have to make do without being surrounded by their hierarchy of supporters. They also have a support crew that is considerably smaller due to the virus restrictions. 2020 has been a year defined by our resilience and willingness to do what’s required to move forward.  That is precisely what these two football teams are doing, likewise their devoted fans, although far away, in the comfort of their own homes, hopefully, will be doing the safe thing.

It would be uplifting for both teams to claim victory this year.  Given that this is not possible, I hope whichever team claims victory, also receives a well-deserved and much-needed boost from the successes of their beloved football team; whether that be Richmond or Geelong remains to be seen.  In the meantime, if you love football, support the teams who, in their quest for a victory, have contributed greatly to lifting our COVID-affected mindset. Go out, decorate your house front, put a flag up on your car; support your team, they need our support more than ever.

I hope that the changes to the football format are only temporary and only in place for 2020. Football is an example of how COVID-19 has changed many things we love and have sometimes taken for granted. No more!

**In dedication to all those, within football and otherwise, who have lost so much during this time of unspeakable loss. 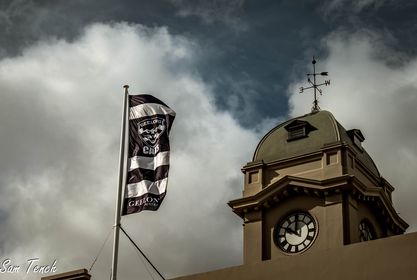 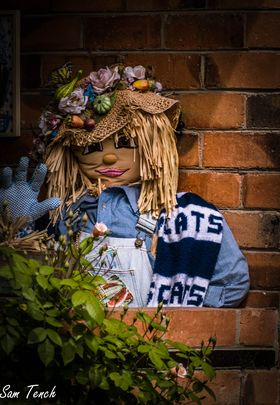 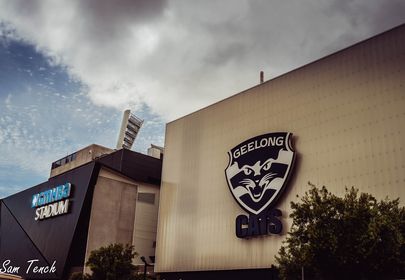 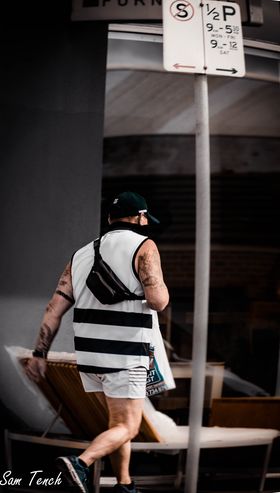 Hat's off this guy!